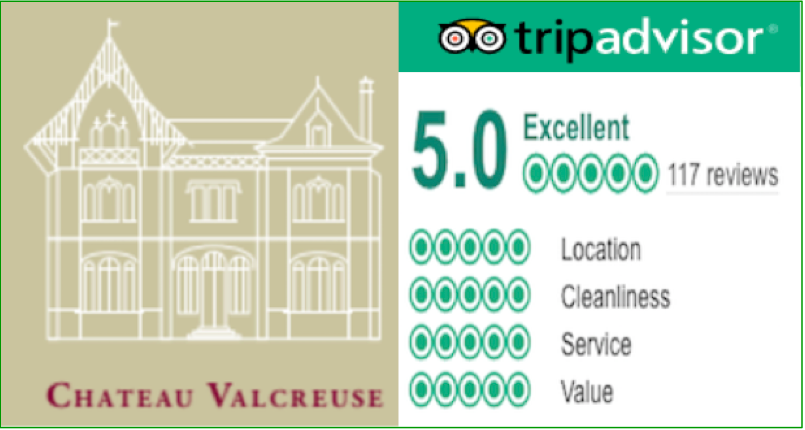 Château Valcreuse, near La Roche Posay in the Vienne, was classed as one of Le Figaro's favourite 200 B&Bs in 2009. If you meet owners Caroline and Alexander and visit their romantic hideaway, you'll soon understand why...

Perched on the side of the wooded valley that cradles the river Creuse, Château Valcreuse boasts stunning views across miles of hilly, green countryside around La Roche Posay in the Vienne. Such a setting is enough to bring peace-loving visitors flocking to the area, yet those who have the good fortune to stay at Château Valcreuse can be assured that these wonderful surroundings are far from being the only aspect they will love about their visit.
The beautifully cared-for château, dating from 1850 and built in the Belle Epoque and Art Nouveau styles, is set in five hectares of hillside parkland. Mature trees such as cedars and pines shade rose arbours, pergolas, vineyard and a swimming pool, and the lazy river meanders its way from La Roche Posay towards Lesigny at the bottom of the estate. And that is just the exterior Belgian owners Caroline and Alexander have applied their discerning taste and managed to combine the magnificence of the château's architecture with the charm or simple, classy interior decoration, giving an ambience of homely style. Add this to the couple's natural friendliness and you couldn't wish for any better place to spend a few days of relaxation.

Warmth
"We have taken something dated and given it a classic feel," say Alexander and Caroline, who bought the château in February 2007 and had only four months to completely redecorate the interior before the start of their first season. The most striking feature of the château's interior is the unusual oak staircase in the centre or the entrance hall: beginning as a single, central flight of steps, it splits into two winding staircases that rejoin at first floor level, making it a heart-shaped work of art that sets the tone of the château's warmth. Oak parquet floors balance the high ceilings and complement the white wooden paneling and cream colour schemes used throughout the ground floor. The snooker room, lounge, bar and dining room feel light and airy due to the generous arched windows that are shaped to match the intricate stonework designs outside. The views are, of course, sublime, and draw the visitor away from the open fire and comfort of the seating to contemplate the joys of country living.

Four of the five en-suite bedrooms lead off a generous landing, itself a convivial area of relaxation, taking up the whole of the first floor. Each is different and contains an intriguing selection of antiques and objets d'art - including working telescopes - as well as a picnic hamper that visitors can take out on their visits to the surrounding attractions. As for the fifth bedroom. this can be found at the top of a staircase that winds its way up a turret to the second floor: As for the fifth bedroom with its own balcony, it is often reserved by couples celebrating a special occasion.

Romance
Caroline and Alexander, sensitive to the romantic powers of their château. have devised a special package for guests wanting to pop that important question: they can organize a series of surprises including a bath in rose petals taken from the 100-year old rose bushes in the parkland, a private candlelit dinner, massages and even a private tour in a hot air balloon that takes off from the castle grounds.
"We're still looking for names for each bedroom, and our current favourite theme is romanticism and its five ingredients emotion, spontaneity, introspection, intuition and imagination - but we're not completely happy about 'introspection' as a bedroom name." Indeed, Caroline confesses to being a perfectionist and, rather than settling for something that is not exactly what she wants, she prefers to wait until the right solution comes along. The chandelier in the dining room is a good example of the couple's attention to detail: they hunted for the right chandelier for two years before coming across this particular crystal model, made by Italian artisans who only produce five a month. And Alexander negotiated for three years before managing to buy the reception desk in Chicago.

The search
It is this perfectionism that brought Caroline and Alexander to La Roche Posay: they had been hunting for a couple of years before they found Château Valcreuse on the internet and hurried to visit. Alexander had always dreamt of owning a château; he began looking in Belgium, but didn't like the style as much as the French châteaux, while Caroline was looking tor a space she could make per feet yet feel at home in too. They fell for Château Valcreuse it was a 'coup de coeur' and as soon as they signed the 'compromis de vente' they set about finding local artisans to carry out the necessary plastering, painting, woodwork and tiling - although they couldn't enter the building until the final deeds were signed.
When this was complete, the race to finish decorating began: "On the day following the signatures we had an appointment with a different artisan every hour," says Caroline, who was aghast when the painter, Alain Grias, announced that he couldn't begin for three months. Once they'd explained their deadline problem, he made an overnight quote and started three weeks later. "He did a terrific job, as did all the craftsmen. We showed Alain the colours we wanted from samples and he mixed them up himself." It was all the more important to be ready for the deadline as Caroline and Alexander had organized an opening reception for the locals, many of whom had never visited.

"The painter brought in extra help and finished the night before, so we were putting up curtains until 3am and we didn't move in the furniture until the day of the reception." The couple had been collecting interesting antiques and art for years. but it was a Belgian interior designer friend who sourced most of the furniture from Belgium, based on the videos and measurements taken by Caroline and Alexander.

Natural rhythm
Now, three years later, Caroline and Alexander have found their own particular rhythm to being bed-and-breakfast hosts: they spend half the year in the château and the other half in Antwerp, Belgium, where Alexander is a real estate investor specializing in car parks, and Caroline, who used to work in banking, is bringing up their 2-year old daughter Florence. "We have a caretaker who lives onsite and looks after the garden when the château is closed, and who is currently transforming the top floor of the château into a flat for us to live in during the summer months." says Caroline; the couple are on call 24/7 throughout the B&B opening period of june to beginning of September.
Despite the difficulties of having two homes, Caroline and Alexander enjoy the convivial aspects and the satisfaction they get when their guests say they feel at home inside the château: "Ladies often leave their handbags in the lounge which shows how relaxed they feel here." Children also love the château for its winding staircases and the excitement of the large garden and its bamboo thicket. Running a B&B is also the chance for Alexander to use the cookery skills he learnt during the degree course he took, since the couple provide 4-course 'tables d'hôte' using vegetables from their own garden and local products.
As for the future, Caroline and Alexander have plenty more plans, often inspired by their regular visits to top-level hotels: these include the renovation of an outbuilding into a wellbeing centre for their visitors. "We like to pamper our guests," admits Caroline - so it's hardly surprising that half their reservations come from clients wanting to come back to enjoy the harmonious ambience, the beautiful setting and the friendly welcome from the hosts of Château Valcreuse.